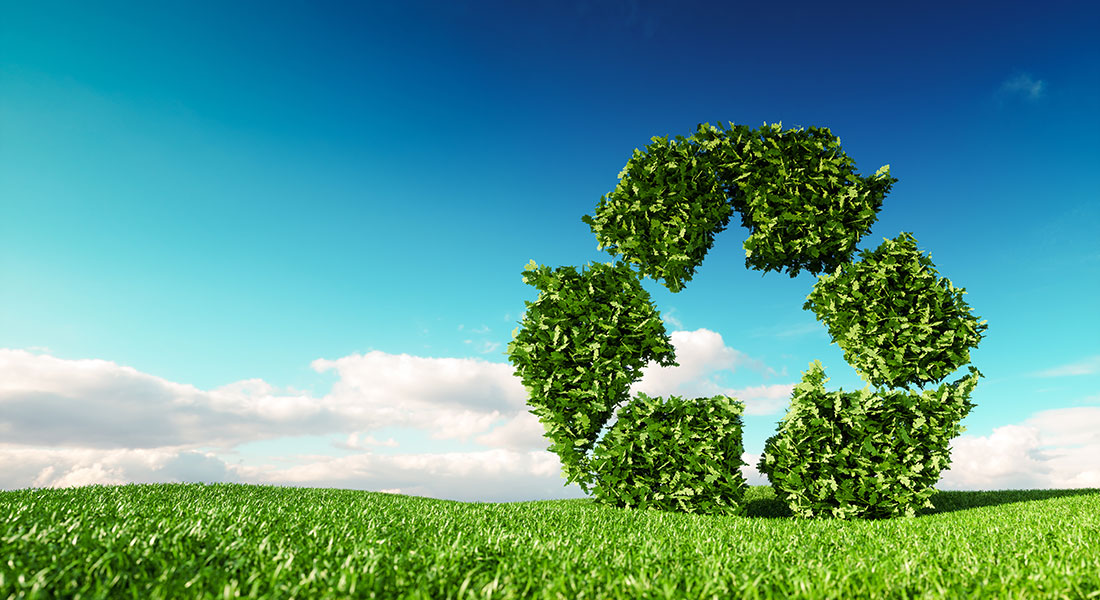 Our society is facing major challenges. The current economic system produces vast amounts of waste. A rethink is needed so that our planet does not suffocate in waste. The circular economy offers a way out of the situation. This could reduce the use of resources and waste to a minimum. Companies like Rinovasol are already successfully implementing this principle today.

The amount of waste generated each year in the EU and in Germany is rising continuously. Across Europe, around 2.5 billion tons of waste are generated each year. The largest waste producers per capita include Denmark, Malta, Cyprus and Germany. In 2018, 417 million tons of waste were produced in Germany alone. Of this, 19 million tons was packaging waste alone - a sad record. That corresponds roughly to 228 kilograms of packaging waste per person.

Germany 2021: A long way towards a circular economy

Unfortunately, this trend has been continuing for years. Since 2010, packaging consumption has risen by a total of 17.9 percent, according to a statement from the Federal Environment Agency. Private households are responsible for just under half of the packaging waste produced, i.e. over 8.9 million tons or 107.7 kilograms per capita. The German government wanted to break this trend back on June 1, 2012, when it passed the so-called Circular Economy Act. The aim of the law is to "promote the circular economy to conserve natural resources and ensure the protection of people and the environment in the generation and management of waste."

After all, there are also positive trends. In Germany, for example, around 853,000 tons of electrical appliances were collected and recycled. This corresponds to around 43 percent of all electrical appliances disposed of and is only just below the self-imposed target of 45 percent. Of all the waste generated in Germany, 70 percent was recycled. But because Germany is unable to recycle all the waste generated here, a significant proportion is exported to other countries.

According to a recent report by the German Association of Waste Management, Water and Raw Materials (BDE), this amounted to around 25 million tons in 2018, of which around 10 percent went to Asia and 89 percent to other EU countries. The most important waste exports include metal waste at around 40 percent, while plastic only accounts for around 4 percent of exports. However, Germany also imported about 22 million pieces of waste - mainly from the Netherlands, Poland and the Czech Republic - to recycle here. For Peter Kurth, executive president of the BDE, imports and exports are "indispensable", otherwise "no circular economy can take place".

How does a circular economy work?

The essence of the circular economy is that all the resources used to manufacture products can be reused as starting materials for new, pollutant-free products. Ideally, the resources are not lost and remain in the economic cycle. This saves resources and protects the environment.

Fourteen years ago, the German chemist Michael Braungart and the American architect William McDonough wrote the appropriate book for this approach, titled  „Cradle to Cradle“. In it, they designed an economic system that no longer consisted of disposable products (i.e., from "cradle to grave"), but of products whose components could be used for new products at the end of their life cycle. At the end of their life cycle, the components are used for new products.

"Raw materials are extracted, processed into products, sold, and finally sent to some kind of 'grave,' usually a landfill or incinerator." Quote from “Cradle to Cradle”

But waste disposal and recycling (which is more often than not downcycling, as the original components lose value and quality) do not prevent resource depletion or environmental degradation, they say. They "merely ensure that these processes are slowed down and delayed."  Following this logic, a circular economy should only have products that are either fully biodegradable or that can be endlessly recycled.

Companies committed to the circular economy

Certainly, the circular economy is still a utopia, but one that is worth standing up for. Even though there is still a long way to go, a rethink is already in full swing. Not only politicians but also private companies have recognized this and are pushing out of the niche into the mainstream. One of these companies is Rinovasol. The company has specialized in the refurbishment and recycling of solar modules.

Rinovasol around managing director Josef Gmeiner has thus dedicated itself to the task of making regenerative energy even more sustainable. This is because solar modules often become defective before the end of their life cycle and are then prematurely scrapped. There, Josef Gmeiner recognized a niche that is not only economical, but also benefits the environment by extending the life of solar modules and reducing waste. In our interview, he explains:

"The product idea came to me when I sold solar modules eight years ago, but then after some time they were claimed. The manufacturer from China no longer existed at that time and so I had to find a solution, since I was in the customer's word. This was then the birth of the Rinovasol repair solution."

The solar industry is growing rapidly every year, and with it, the amount of waste generated by old solar modules is also increasing. According to the "White Paper on Circular Economy" published by Deutsche Umwelthilfe, up to 51,600 tons of old modules will have been disposed of by their former owners by 2020. Other forecasts even assume 1,000,000 tons of old modules annually by 2030. To transform the solar industry into a circular economy, improvements in disposal and recycling are needed.

"Currently existing collection and disposal systems for used PV modules are not yet capable of handling the expected volumes in a maximally climate-friendly and resource-efficient way. Adequate treatment of all used modules cannot be ensured at present. For example, still too often functioning photovoltaic modules are damaged or destroyed during disassembly or collection." Quote "White Paper on the Circular Economy" by Deutsche Umwelthilfe.

If the industry continues to grow at such a rapid pace - and that's what it looks like at the moment - then, according to forecasts, the volume of waste will increase to more around 78 million tons by 2050. Concepts such as those offered by Rinovasol come at just the right time. Thanks to Rinovasol's patented refurbishing process, more than 95 percent of all modules can be refurbished and put back into use. This saves resources and significantly reduces the amount of waste generated by the industry.

"The practical background: 96.3 percent of the modules supplied can be refurbished and returned to the market. And in 90 percent of cases, there is no need to dispose of modules. Almost every damaged module only needs urgent refurbishment to restore performance and profitability. This makes modules available anew for further use and significantly extends their life cycles," emphasizes Josef Gmeiner.

To date, Rinovasol has thus been able to refurbish or recycle around one million solar modules, making an important contribution to the transformation from a throwaway society to a circular economy.

Are you curious? Would you like to invest in a company that is committed to the circular economy?
Then take a look at the offer profile.