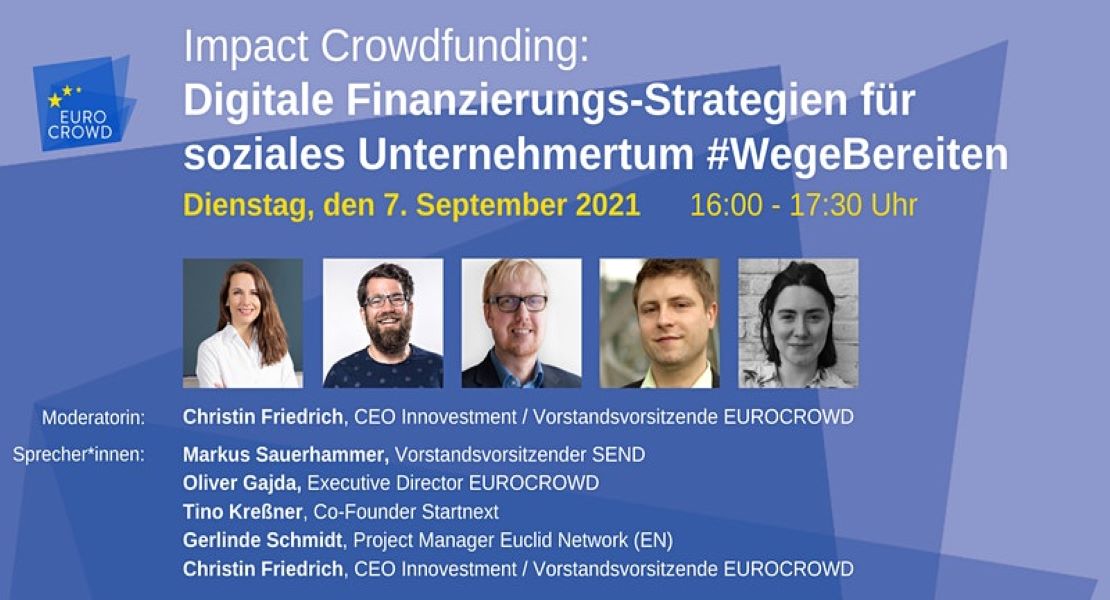 We are happy to briefly summarise the findings of the webinar for you here. By the way, the recording of the event can also be accessed at the following link: https://youtu.be/aLcYIvEEX4g

Please note that the event was held in German. 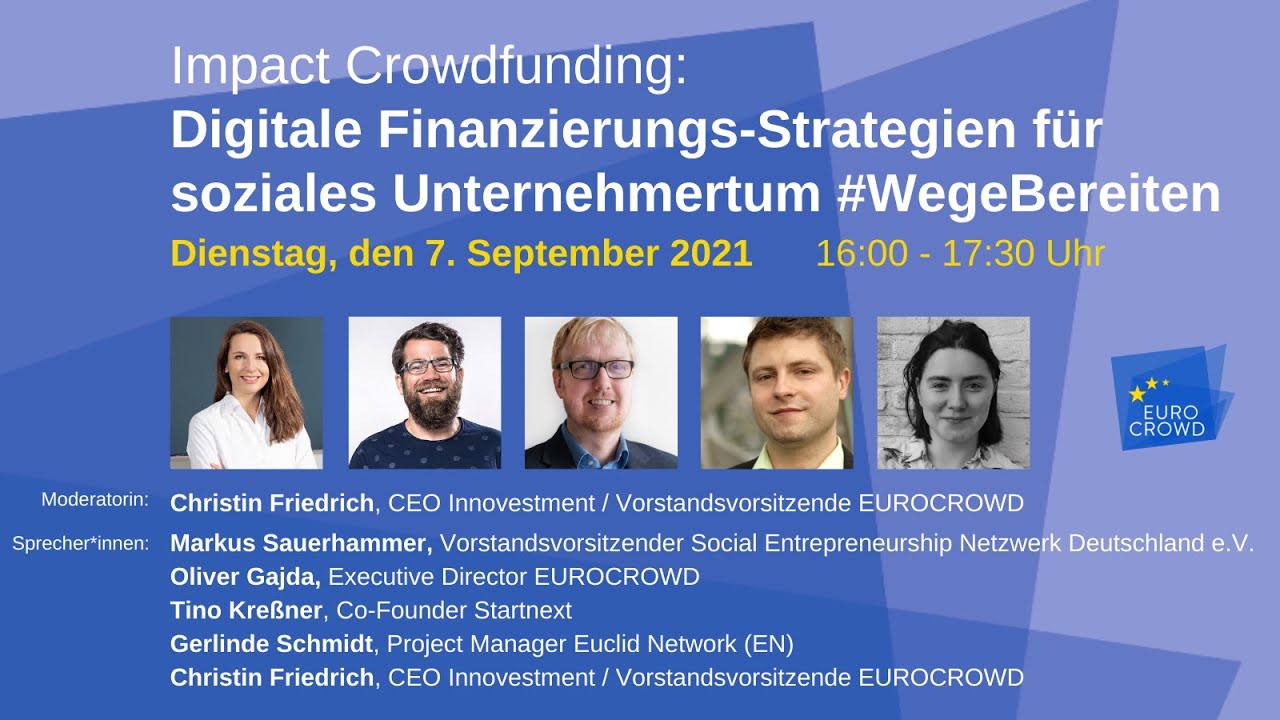 To start with: What are social entrepreneurs anyway?

Social entrepreneurs are committed to solving social and environmental challenges. They are key to the development of the social economy across Europe and have long been valued as important drivers of social innovation. What makes them special is that they define their success primarily through their social impact and only secondarily through their financial sustainability. Alternative financing instruments such as crowdfunding complement established financial services, but also give social enterprises a higher public profile and allow for greater outreach.

Through crowdfunding, the middle of society finances new ideas

Christin Friedrich, CEO of Innovestment and Non-Executive Chair of EUROCROWD, opened the webinar by highlighting the importance that crowdfunding has gained across Europe in the past and the opportunities that crowdfunding can have for the social economy. The link between crowdfunding and other alternative funding options, such as venture philanthropy, government funds and grant programmes, already seems to be emerging across Europe and holds significant potential for the future development of the sector.

The link between social entrepreneurship and crowdfunding was highlighted by Markus Sauerhammer from SEND, who recalled his first social business start-up and how it was funded through its first customers. Digitalisation opens up new possibilities for financing innovations, crowdfunding is one of them. Sauerhammer stressed the need to create funding opportunities for social innovations that meet the needs of businesses that primarily seek social impact. The need for this discussion is particularly important before the elections in Germany, he said. He pointed out how crowdfunding already supports social entrepreneurs very well, but there are clear steps that the government could take to create further incentives for funding social innovation. These include specific tax incentives for social enterprises and a clear distinction from for-profit companies.

"One of the biggest challenges is the issue of funding, because here impact investors, crowdfunding platforms as well as corresponding foundations are often left alone and do not receive the same support from the public sector as profit-maximising start-ups."  Markus Sauerhammer

Oliver Gajda from EUROCROWD explained that crowdfunding has long since established itself on the market. He referred to the recent European law (European Crowdfunding Service Provider Regulation), in which the European legislator emphasises that crowdfunding is more than just financing, but can also offer other benefits, such as validation of a business idea, insights and information about markets and customers, or marketing. He went on to say that with this in mind, there should be no need to constantly discuss the validity of the tool, but to start reaping its benefits for society and the economy.

Referring to a recent study by the European Venture Philanthropy Association (EVPA), he explained that crowdfunding already covers a large part of what traditional venture philanthropy funds would invest, from non-repayable grants to later stage equity investments in social enterprises. EVPA argues that crowdfunding is already an important tool to combine and adapt philanthropic financing. Gajda also pointed out that the European Business Angel Network (EBAN) writes in a 2020 report that business angels who focus on impact investing in social enterprises do so both in angel networks and on crowdfunding platforms. Again, the acceptance of crowdfunding in other alternative finance sectors is remarkable.

Finally, using a recent EUROCROWD study, Gajda explained that government organisations across Europe are already using crowdfunding opportunities through match-funding activities to support social entrepreneurs or financially excluded parts of the economy. He explained two examples, one from Milan/Italy, and one from Lithuania. In the first case, the city council used a crowdfunding platform to channel funds into third sector organisations working for the sustainable development of the city, alongside citizen support, during the Covid crisis in 2020. In the second case, a state investment fund used a crowdfunding platform to work with citizens to provide loans to micro and small enterprises that did not have access to the banking sector.

The organisation, in collaboration with others, has produced a funding toolkit for social entrepreneurs, which provides guidance and help with start-up. She pointed to relevant policy discussions in Europe that offer the opportunity to shape a more social Europe in the coming years, such as the European Industrial Strategy, Social Taxonomy or the Social Economy Action Plan. However, Schmidt stressed that the success of social entrepreneurship requires the participation of private capital. Crowdfunding offers citizens direct access to investments or to finance social innovations and needs support in the form of appropriate political promotion at European and national level.

Tino Kreßner, co-founder of Startnext, the German reward-based crowdfunding platform, explained how social entrepreneurs have become a significant group of project initiators on their platform. He highlighted how crowdfunding has made an important contribution to social enterprises in general, but also in crisis situations such as Covid or the recent floods in parts of Europe, shows how crowdfunding can be used quickly to provide targeted and sustainable support in addition to quick disaster relief. He emphasised that crowdfunding is much more than just raising money, citing benefits for businesses such as market testing, consumer feedback, proof of concept and support for pricing strategies by identifying willingness to pay for different prices.

"Crowdfunding is not only a tool to raise capital, but offers the opportunity to do a risk-free market test."  Tino Kreßner

However, despite the focus on social impact within society rather than profit maximisation, social entrepreneurs do not have access to specific government funding or support programmes. Moreover, funds raised through crowdfunding for a fee would be taxed at the same rate as revenue from consumption-related businesses on online marketplaces. Kreßner called on policy makers to provide clear support for social entrepreneurs, in particular by including crowdfunding in existing support programmes and waiving sales tax for social enterprises when they test their services through crowdfunding.

He also said that social entrepreneurs should receive support in assuming liability for start-up loans. Kreßner said that the German development banks should proactively use crowdfunding to evaluate creditworthiness, as some of the banks are already doing successfully with the Mikrocrowd programme, where start-ups can receive up to €50,000 in bank loans at less than 1% interest if they successfully run a reward-based crowdfunding campaign of at least €20,000 under the programme. The regional development banks NRW Bank, IBB Bank, Bremer Aufbaubank, L-Bank, WI Bank and SAB are already working with this model. Matchfunding programmes are another important instrument that municipalities can use to support social impact, Kreßner added.

In the discussion that followed, the lack of recognition of social entrepreneurship in terms of actionable measures was highlighted. If the call for social innovation is to be believed, the government must also support it with appropriate soft measures that incentivise entrepreneurs to prioritise social impact. As long as personal risk and investment in social good are treated in the same way as profit-maximising innovation, there will be less interest from potential entrepreneurs and investors.

Crowdfunding, through its social engagement with a large audience, has the potential to be a multiplier for social innovation across society. With the upcoming federal election in mind, it is clear that social enterprises need to be supported at European and national level, especially in funding their ideas, to fulfil their key role in achieving SGDs. It is time for policy makers to understand that some sectors need to be treated differently. Existing legal definitions of non-profit need to be redefined to encompass new forms of social entrepreneurship, social innovation and digitalisation.

Here are the papers that were discussed during the event: